I realize that I have written about my mother’s second marriage here before, but as I sit and watch her and her wonderful husband hanging out in my living room with me, I can’t help my desire to want to shout out their story and tell it over and over again.

My mother.  A beautiful and caring woman who has been my life line, my strength and my inspiration.  Someone who has taught me to accept what is, to make do with what one has and to persevere when the desire to quit is lurking nearby.

In her mid 70’s after having lived as a widow for twelve difficult years following the death of my father (her childhood sweetheart),  she met a man.  A man she was not looking for.  A man she was not interested in meeting.  A kind, intelligent persistent widower who had heard about her via mutual friends.

He lived in California, she in Puerto Rico.  Friends insisted they talk on the phone.  He gave her his email address, she purposely lost it. He had family in Puerto Rico and used that as an excuse to go meet her.  She reluctantly accepted his dinner invitation.

They dined, they talked, they laughed.  They dined again the next night.  And the next.   They laughed some more.  A month went by and they continued to ‘secretly date’.  Not a word was said to family or friends.  Not a word to their kids.

She traveled to the States to care for me after an operation.  While at my house, she behaved strangely.  She giggled often.  She texted a lot.  She smiled. She sang.  She skyped.  She was more giddy than my teenage daughter.  What was going on?

My husband caught her skyping in the middle of the night.  Who was she taking to?  She answered texts while at the dinner table with her grandkids watching her.  She was in her own little world.

Finally, I demanded she tell me what was going on.  She smirked, hesitated and blushed.  She informed me that she had met a ‘nice man’ who lived in California. WHAT??

After interrogating her, alerting my siblings, conducting a paid background check on him and google earthing his home,  I sat wide eyed with a dropped jaw, in disbelief.  She was flying to CA to visit him.  WHAT??

She flew to him.  She remained the moral and assured woman she had always been.  She stayed at a hotel near his home.  They dined, they laughed, they talked.  She called me to tell me they were engaged.  WHAT??

Who was this man?  Was she in danger?

Within a week, he had flown back to my home with her.  They were engaged and beaming with glee.  At a luncheon with my siblings where he proclaimed his love for her and his desire to marry her, we too were instantly smitten.  What an amazing person.  What a kind, loving and respectful man.  How he cherished my mother.  How happy they seemed.

On December 4, 2015, they will be celebrating their 5th year wedding anniversary.  They are by far, the sweetest, cutest and happiest couple I know.  They hold hands, they kiss, they watch out for one another, they travel, they dance, they dress up, they live and they love.

They say love is patient and kind.  I see that it is also within anyone’s reach, no matter the age.

Wishing them both many more years of love and health! 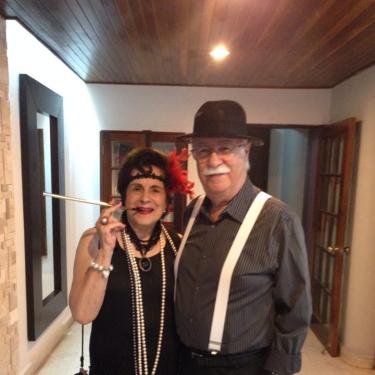