Suddenly, I was rudely and abruptly awakened by a piercing pain in my chest.    I gasped for air and shrieked.  Was there an intruder in the house and had he stabbed me?  Thinking we had been attacked by aliens, Mr. brickhouse jumped out of bed alert and wide-eyed, ready to defend his domain.

Mr. B (still technically asleep) was frantically circling the bedroom asking me if he should call an ambulance.  I signaled for him to hold off and I began to relax my body and to breathe slowly.  The pain was gone.  No need to call the ambulance, it was probably just gas.

During the next couple of weeks I became increasingly weak.  Walking to the kitchen felt like I had climbed Mount Annapurna (Mount Everest is so overused.) I was short of breath all the time and continued to have chest pains, particularly at night.

After seeing a cardiologist and discussing my long-term use of steroids for my Rheumatoid Arthritis, he was concerned that them “roids” had done a number on my heart.  A stress test was ordered.

Gulp.  I failed the stress test.

I am used to things being wrong with my body but this time, I was really scared.  I was only 44 at the time and was not ready to die of heart failure.  I had visions of living a long life (with deformed joints and all, nevertheless, a life) and was NOT prepared to die.

That evening my chest pains intensified.  So much so that we should have called an ambulance but stupidly decided to wait it out at home.  After propping myself up with pillows, the pain vanished once again but not before I promised Mr. B that I would call the doctor first thing in the morning.

What happened next made me seriously doubt all my parenting skills and wonder where Mr. B and I had gone wrong.  The next morning I put a call into my cardiologist and left him a message alerting him of the continued pains.  In trying to maintain some sort of normalcy with my children, I took my daughter and her friend to their scheduled manicure appointments.  Just stay calm, brickhouse and don’t scare the kids.  While waiting at the salon, my cardiologist called me back and told me to do exactly as he instructed.

“I want you to go home right now, pack an overnight bag and get yourself to the hospital ASAP.  Enter through the ER, and I will be waiting for you there.”

Oh My God, try to stay calm brickhouse and find a way to tell your daughter.

After calling Mr. B and telling him to meet me at home and calling a friend to ask her to pick up my daughter and her friend, I decided to tell my daughter what was going on.

Sweetie, mom is ok.  Everything is fine.  I just have some pain in my chest and the doctor wants to check it out.  I have to stay overnight at the hospital , but I am sure it will be nothing.  To which my daughter responded, “But MOM, who’s going to take me to get my haircut later?”  Okay… I must have done a really good job of hiding my fear, so much so that all she cared about was her haircut.

To make matters worse, as we were arriving at the ER, my son (knowing what was happening) called my cell phone and said, “MOM, where did you put the Dunkin Donut munchkins? I can’t find them anywhere!”  Really?  I may be dying and you want to know where the munchkins are.  What kind of evil children had we raised?

Ok, I’ll get to the important stuff now.

After getting hooked up to all types of monitors and EKG’s, the pain came back.  We are talking, GIVE ME SOME DAMN MORPHINE NOW OR I WILL KILL YOU ALL – type of pain.  Handfuls of Nitroglycerin tablets were forced into my mouth by the nurse while other nurses ran around the room checking my vitals and monitors.  It hurt so bad.

Next thing I know, I am riding in back of an ambulance in pain but this time, the pain was not coming from my chest.  The pain I felt was in my whole body – as the ambulance hit every single pot hole on every road as it sped to a bigger hospital, 20 miles away. OUCH

I was wheeled to a room on the cardiac ICU floor.  I looked around and noticed that the average age of the patients on this floor was...95.  Why was I here?  I didn’t belong.  My roommate was waiting for me in our room.   A very nice elderly woman who for her own protection, was placed on “bed-arrest”.  Meaning, a bed alarm would go off if she tried to escape.  Yea, It was not a good night.

The next morning, they performed a Coronary Angiogram (a cath) via my groin, to check my arteries and my heart.  I was given the good news once I awoke, that my heart looked perfect and that there was no sign of damage or disease.  You mean, I’m not going to die? AYA CARAMBA!!!  But, what is wrong with me?

After the procedure, I was to lay still and flat on my back on the hospital bed for several hours to avoid any bleeding or other side effects of the cath going through my groin.  Ugh.  I looked over at my roommate’s bed but she wasn’t there!  Oh Shit.  Did she…perish?  I was afraid to ask.

The next several hours were by far the most humiliating hours of my life.  Having to lay flat without moving my legs or body meant I could not get up for any reason, including to use the bathroom.  The instructions were to ring for a nurse and she would help me, using a bed pan.

I don’t know if they were short-staffed or what but after ringing the damn bell for 20 whole minutes, no nurse came to my rescue.  I was wishing my roommate was still with me so that she could help call a nurse.  I really had to pee.   I kept hearing the beeping out in the hallway but it was as if the entire floor had been deserted.  Finally, not being able to hold it any longer, the flood gates opened and I was soon laying in a pool of my own urine, completely drenched. 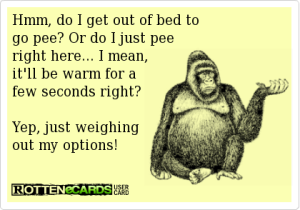 The nurse finally showed up and saw that I was crying.   She apologized and began complaining about staffing and how it was someone else’s fault.  Are you kidding me?  I am in a cardiac ICU floor and it took 20 minutes for a nurse to show up?  I could have been having a heart attack!  Maybe that’s why my roommate was “gone”!

After filing a formal complaint the next morning and listening to the head nurse profusely apologize, I was released from the hospital.

In the end, we found out that the pain in my chest was caused by inflammation and  fluid around the lining of my heart and lungs (pericarditis),  which would get worse when laying down.  Just another lovely symptom of RA.  The abnormal stress test?  That was a fluke.

I learned a few important lessons after that whole traumatizing  experience;

* Never use my poker face with my kids during an emergency

*  Though warm, never lay in urine again – be it mine or anyone else’s.

33 thoughts on “Is That a Heart Attack You Are Having or Are You Just Happy to See Me?”