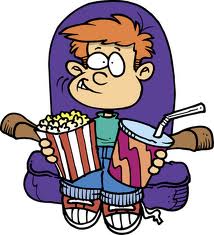 He actually loves movies.  Really.   He looks forward to the great savory and buttery trans fatty popcorn, the (Oh My God I’m going to miss half of the movie because I’m going to have to pee for the whole two hours) supersize soda, the previews (trailers now) and the big screen.

What he is not a fan of, is what happens inside the theaters.

It is usually nothing tragic, mind you, just a bit uncomfortable and annoying.

Like the time he was sitting in a crowded dark movie theater ready to watch the feature of the day, when he smelled something…foul.  He turned his head to the right – nothing.  He turned his head to the left and – THERE THEY WERE!  Bare Feet!  Big Ugly Bare Feet.  Big Ugly Masculine Bare Feet.  Big Ugly Masculine and Stinky Bare Feet.  Right by his left ear.  Really?  He asked the person to move them the hell away from him – but the guy kept the shoes off and the aroma was still lingering, in the air.

Another time, in the middle of an important scene, the lady two seats over, began to unwrap her foot long Subway sandwich for what seemed to be an eternity.  “Crinkle crinkle, rustle rustle, rip rip, crinkle some more”.  Then, as if that was not bad enough, the hungry lady had asked for ONIONS on her sub!  That aroma lingered in the air…as well.

Or the time when a couple from Russia who did not speak English, brought all their young kids to the R-rated movie my husband was looking forward to watching, including their infant son, who began wailing.

The best incident by far, was the one at our local “earthy” theater. As he sat happily munching on his popcorn waiting for the movie to begin, an earthy-crunchy Woodstock sort of man sat in the seat directly in front of him.  When the man leaned back to rest his head on his seat, his grayish and frizzy loooong braid, fell right inside my husband’s tub of popcorn.  Let’s just say there was now extra oil in his already buttered corn.

Being the great husband that he is, he will still take me to the movies, but the necessary prep that goes into securing that he has a pleasant, stink-free, noise-free and oil-free movie experience, is a lengthy one.

We get there early.  We scout out the whole theater.  We profile all the suspect movie goers that enter.  We check out what they are carrying into the theater.  We look for any 5 course meals they may be hiding in their pocket books.  We make sure they have crew cuts, clean crew cuts. We look down at their feet.  They must be wearing socks, absolutely NO flip-flops.  We make sure there are no young screaming children. Then, we give everyone the evil (don’t you dare sit next to us) eye, and stare them down.

Once all that prep is complete, we pray that the people who are sitting near us, do not have a huge bag of unopened peanut M&M’s which they will undoubtedly open during a quiet scene in the movie.  We look out to make sure our movie “neighbors” are not holding the cardboard trays filled with movie theater fake-cheesy nachos or bright blue frosty frozen drinks they will be slurping, in no time.

Once we are finally settled in and the movie has begun, my husband has to excuse himself and shimmy his way through the people in our row, stepping on their toes, almost spilling their popcorn and blocking their view, as he tries to make it to the men’s room to relieve himself of the 100-ounce (banned by New York’s Major, Bloomberg) supersize sugary soda he drank, while looking for evil movie goers.

What horrid movie experiences have you had?

33 thoughts on “Why My Husband Hates Going to The Movies”