I often wonder, why he married me.  Why and how did he endure such cultural torture?  He could have run at any point – far, far away.  But (for the life of me), he stayed.

Others ran as fast as they could.  Some hung in for a little while and tried to fight the impossible, only to realize that there was no hope.

I couldn’t adore my parents more.  I have often described my father as a very, very strict man.  Of course, as a young girl trying to assimilate to a new culture and way of living, this did not sit well with me (as I kicked and screamed).  I gave it quite the fight in trying to convince my parents that our old-fashioned Spanish values we had brought with us from Puerto Rico, did not belong in the States where we now were.

As it often is the case (darn it, they are always right), it was not until I had children of my own and was faced with choosing the values I wanted for them, that I finally understood what my parents were doing.  It was still tough as @#*%, believe me, but I get it now.  I am happy to be able to look back and find the humor in the events that took place.

My father was a big man and had the lowest voice around.  One that led him to be a radio DJ in his younger days.  In reality, he could be as gentle as a lamb but knew his façade had to be tough.  He had a presence about him that earned him immediate respect (the kind that silences a room and parts the seas.)  He was loved by many and feared by some.  Especially, the some that happened to be between the ages of 14 and 18, had not yet mastered their cracking voices, had no control of their raging hormones and who expressed an interest in either of his two daughters.

This did not create a problem for my younger sister who had no interest in boys, then.  She loved to stay home, read books, listen to music and watch tv.  For me, however, it was a whole different story.

I was born loving boys.  I was shy, yet social and seemed to attract male attention even at a young age.  Many times the attention was inappropriate and unwanted, but as I got older, flattery took over.

It was well-known in our school that you were not to mess with us sisters.  Not only did my dad help in establishing that rumor but my older brother served as the enforcer when my dad was not around.  Many of my brother’s friends were warned and often threatened.  It made it for a, not so fun time for me.

I will never forget the number of – shorter than me, skinnier than me, acne-filled, middle school boys who wanted to take me on dates.  I would explain that in order to do anything with them, they would have to speak to my father and ask for permission.  That usually ended their pursuit of me, but every once in a while, a brave boy would step up to the challenge.  After rehearsing and getting their nerve up to call my father, they would hang up with a bruised ego, in humbling defeat.  My dad would answer the phone in his very deep voice (the poor scrawny fellows), would let them finish their scripted spiel and would say, NO.

Papi, please can I go to the movies with him?  Why won’t you let me do anything?  I wish we had never moved here!  I would cry to my mother who assured me that things would get better (Dear God,when?) and that my father did it because he loved us.

On the rare occasion that I was given permission to go out,  my date would have to not only take me out for ice cream or a movie, he had to also treat and entertain my younger sister and younger brother, who served as designated chaperones.  Boy did I hate it when they had to tag along and they were not exactly thrilled to be there, either.

I made it through High School with my share of boyfriends but they would soon give up after all the work dating me, entailed.  Talk about high maintenance!  Most of the time, I was not allowed to do whatever activity they wanted to do.  We tried every avenue we could, even having my boyfriend’s parents call my dad to reassure him that they would be home and chaperoning at all times.  Unfortunately, my dad did not budge.  Ay!  Dios Mio!

Then, along came my husband.  A young man from a wonderful family, mature beyond his years, polite, more chivalrous than a knight, smart and cute.  We had gone to High School together but did not start dating until college.  He was the perfect Eddie Haskell.

Although we were in college and one would think that we would have certain freedom common of people our age, because I was living at home, the rules still applied.  Had I been in PR, it would have been the norm.  Here, it was unheard of.

The rules were pretty clear.  NO boy was allowed upstairs near our bedrooms.  When having a boyfriend over the house, somebody else had to be in the room with us or on duty every 10 minutes to check up on us, there was to be NO sitting on your boyfriend’s lap, NO kissing in the car when your boyfriend dropped you off from an outing (as we learned after my father caught us and locked me out of the house), the said boyfriend, was the designated errand boy/servant that needed to be sent everywhere to get everything needed for the household (even though he had just driven 2 hours to see me and nobody else was busy.) 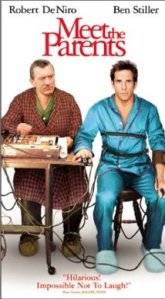 As we became more serious, the hazing continued.  He had to prove that he was worthy of my hand and would earn zero respect until he showed he was ready for marriage.  We were now in our mid 20’s (young adults, people!), lived two hours apart from each other while working in our respective jobs and tried to see each other on the weekends.

The poor guy, had to sleep on the living room or dining room floor, when staying at our house.  We didn’t have an extra room and upstairs was off-limits!  My loving dad enjoyed teasing him and giving him slack.   Before heading upstairs at night, knowing  my husband was curled up on the floor, usually under our dining room table (for maximum protection), he would turn on our very noisy dishwasher which made it close to impossible to fall asleep.  My father would then make a point of waking up very early the next morning, so he could blast the Spanish music (my boyfriend would have to learn to dance to) in the living room, sing along loudly to the song and use every noisy pot and pan we had in the kitchen, as he fried eggs and bacon for the family.  Needless to say, my husband never slept well while visiting me.

When it was time for us to get engaged, my husband knew what had to be done.  God Bless Him.  On a snowy, wintry November night, he and his parents drove two hours to our home to ask for my hand. My grandfather was visiting with us at the time and was to be part of the event. Although  small in statute, my grandfather could also be…feared. We waited in the living room for them to arrive.  Once they did, my husband spoke first (I am pretty certain his voice cracked numerous times and his pants were soiled.) He announced to everyone in the room what his intentions were (to marry me and fly across the world to escape and never turn back) and why he was worthy of my hand in marriage.

My father and grandfather who sat in very comfortable royal-like chairs, listened to what was being said.  My in-laws to-be, were then asked to express their opinion and thoughts about their son being ready for marriage (they could have run at that point, but bless their hearts, they too stuck it out.)  My father and grandfather then asked their questions.  After much discussion, my father announced that he would indeed give us his blessing in marriage.  Halleluhia, Praise the Lord, Word to your motha (and I’m pretty sure a fat lady sang.)

The transformation was instantaneous.  Once we wed, my husband was King in my father’s eyes.  He could do no wrong.  In fact, my father would remind me to tend to my husband when he was hungry and when he needed something.  Don’t worry, my husband knew better than to adopt this part of our culture.  I was sure to let him know that my father was the only man I would serve.  One sassy Spanish evil-looking eye from me, was all it took for him to realize this fact.

You could feel my father’s sense of relief that his daughter was married and that he would no longer have to worry so much (in other words: this is a final sale son, there will be no returns.) One down, one daughter to go.

My husband had accomplished the seemingly impossible.  He passed all the tests (barely)…and believe me, there were a boat load of them!  In the end, my father and he became very close and had mutual respect for each other.

My sister married two years after I did.  She lucked out some after having me pave the way for her and her husband (she still owes me big time) and, because of the fact that my dad had mellowed some by then. Her husband was also a fast learner, and knew better than expect his new wife to serve him.

As I look back, I appreciate everything my father did on my behalf.  He was an amazing and loving father and wanted only the best for all his children.  Would I still argue with him about his ways if he were alive today?  You betcha!  But I would do it with a smile.

As for my husband, he is deserving of some sort of life award… for at least nine lives.  He hung in there, persevered, endured, suffered, was broke from having to take my siblings out as well and put up with more than any sane person would and he did it all for me.

Although I am a very strong woman and wife (and wave my finger at him often),  I am  more than happy to spoil my husband in any way I can.  I, will even serve him his meals before serving myself.  And you know what?  Like with my father, I do it out of pure love.