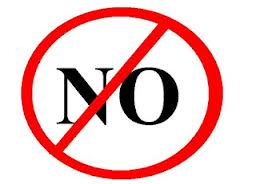 No.  Such a short and simple word.  Grammatically pleasing and a guaranteed spelling bee winner.  But boy, the power it possesses.  Too often,  it is a word that shatters our dreams, desires and passions and one that can limit our path into our future.  A word we love to hate and one that is a prerequisite to rebellion.

No, can also mean the difference between life and death.  We learn from a very young age to obey this word to keep us safe.  No, can be the welcoming news we anxiously want to hear after a medical scare and a word we rely upon to protect ourselves and our bodies.

For me, No means – watch me try.  I believe I was born rebellious and ready to question it all.  As a baby, I refused to eat my food (too bad that stage ended).  I would shut my mouth very tightly, making it impossible for my father to get the spoon of baby food into my mouth.

As a young girl,  I became unhealthily attached to a large metal hair barrette I owned.  By attached, I mean that I wore this barrette day and night – every day.  You see, I hated my wavy short hair and was convinced that this barrette, would hold down the curls and keep the top of my hair flat and straight – for ever.  No one could take it away from me and I refused to give it up. 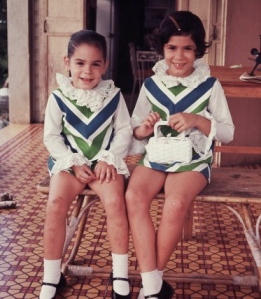 As a teen, I decided that my strict parents had this whole child-rearing thing, all wrong.  I made sure to tell them that children had rights too and that we mattered.  I quoted psychologists and studies that proved my theory, only to be shut down and told to go to my room.  Ok, so I was bratty about it and always had to have the last word, but I did not give in. To the detriment of my then obeying siblings, I made family dinners, an argumentative unpleasant experience.

Fast forward to today.  I still cannot hear the word, No.  It makes me cringe, sweat and causes smoke to come out of my ears.  I am however, wiser and understand that the word has to exist.  Especially, when having to use it on my own teenage kids.

Where my rebellion has helped me tremendously, is in how I approach life.  This stubbornness has made me the strong woman who I believe I am.  It has helped me fight my Rheumatoid Arthritis and opened up doors and opportunities I wouldn’t have had if I had just accepted No, for an answer.

I have tried to instill this in my children.  I often tell them to respectfully (this is critical) explore the reasoning behind the No, they have encountered.  Is it an absolute?  Did accepting the status quo come from their own insecurities and assumptions that what they want, is not possible?  Have they tried everything in their power to make it work?   What do they have to lose?  If they try and it still does not work, at least they know they took it to its furthest level and tried.

There have been numerous examples of how persevering and not giving up has paid off.  After managing a bank branch for many years and understanding the importance of customer service, courtesy and mutual respect, I learned how to approach a No, more effectively.

I remember when my credit card company threatened to raise my interest rate just because they could.  I searched for the name of the CEO of that company and wrote him a personal respectful note asking him to reconsider.  The interest rate was not raised and he even put a cap on my account so it would never go up.

Or when I called Mr. Dell’s (yes, from Dell Computers) office after my brand new computer had a faulty mother board and customer service refused to replace it.

A few years ago, my daughter applied to attend a summer theater camp that cost more than we could afford.  When she saw the cost, she immediately accepted the fact that she could not attend.  I then asked how badly she wanted to go and encouraged her to write a letter expressing her desire to attend.   It turned out that they had extra funds and offered her a scholarship.

When my son was a senior in high school, he applied to the many scholarships available through the school and town for those students going on to college.  When it was time to attend the awards event in which the winners are announced, he did not get the mandatory letter from the school letting him know that he was a recipient of one of the awards and therefore, should attend the ceremony.  He immediately accepted the fact that he would not be awarded a scholarship.  I told him that we should call the school to verify.  Sure enough, it had been an error and his letter had been lost in the mail.  He ended up getting the highest monetary award presented by the principal of the school.  Had we not checked, he would have missed such an important ceremony.

I am by no means advocating breaking the rules, yelling, harassing or threatening in order to get your way.  After all, there are laws and rules we must accept.  I want my children to know that they should not give up at the first sign of a struggle. That even if it involves extra work or time, it is worth a shot.

Often times, the possibility and probability that it will work out for you, are there.  But, you have to ask for it and you have to try.